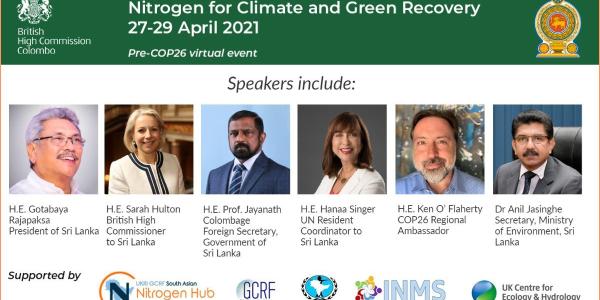 Countries will come together in Glasgow this November for the COP-26 conference to discuss how the world can mitigate climate change and work towards green recovery after the pandemic. Emissions anywhere effect everyone and therefore strong international collaboration is needed to work towards net zero emissions to reduce the impact of global climate change. However, during these discussions, nitrogen pollution, a major contributor to both climate change and ecosystem degradation is often overlooked. The UKRI GCRF South Asian Nitrogen Hub has been working hard to help ensure that the nitrogen challenge is included in the upcoming COP-26 discussions and raise awareness on the need to manage nitrogen sustainably.

In April 2021, SANH supported the Government of Sri Lanka and the British High Commission in hosting the ‘Nitrogen for Climate and Green Recovery’ high-level event, held in Colombo, Sri Lanka (virtually). This included launching the #Nitrogen4NetZero initiative which seeks to mobilize action on nitrogen for climate in preparation for COP-26. #Nitrogen4NetZero illustrates how action on nitrogen is needed to meet ambitious global climate goals, while offering multiple benefits across United Nations conventions. Net Zero greenhouse gas emissions will be impossible to achieve without action on nitrogen, highlighting the important role of nitrous oxide. At the same time, reducing nitrogen pollution offers multiple win-wins across sustainable development for air, water, biodiversity, stratospheric ozone depletion, soils, food and the economy.

The event, which took place over three days, opened with a statement from His Excellency the President of Sri Lanka Gotabaya Rajapaksa, delivered by Foreign Minister Hon. Dinesh Gunawardena. The president emphasized that “...Climate scientists have been studying and grappling with the impact of increased carbon dioxide emissions in the atmosphere for decades. I believe it is important to address the issue of nitrogen waste in a similarly urgent way, and to broaden the ongoing discourse on climate change accordingly.” The first day of the event included statements on behalf of six out of eight of the South Asian governments who all stressed the need for urgent action on nitrogen as well as the introduction of financial mechanisms to allow countries to implement sustainable nitrogen management. H.E. Sarah Hulton, British High Commissioner to Sri Lanka also reinforced this sentiment saying, “We need to ensure we build a shared approach that protects climate-vulnerable countries, not just the countries that can afford to take action.”

In addition to speeches from South Asian ministers, Day 1 was addressed by the Chief Scientific Advisor of the UK Department of Business Enterprise and Industrial Strategy (BEIS), Prof Paul Monks, who pointed to science and ambition for COP-26.  He was followed by Prof. Mark Sutton, on behalf of the GCRF South Asian Nitrogen Hub, highlighting the need for sustainable nitrogen management in climate mitigation & green recovery.

Day two of the event consisted of a multi-actor dialogue between scientists and policymakers from across the region. Eight out of the twelve presentations were from experts from the South Asian Nitrogen Hub who shared their expertise and cutting-edge research with the attendees. Rsearchers from SANH provided a broad perspective on how nitrogen pollution is impacting South Asia from the impact of nitrous oxide on the climate, the health impacts of nitrogen air pollution to how nitrogen in water threatens tropical coral reefs.

The final day of the event was a closed session that allowed policymakers from South Asian countries make comments on a proposed draft text to be taken to the COP-26 discussions. The proposed draft encourages countries to include action on nitrogen as an important contribution to reaching  net zero, while offering multiple co-benefits across the different campaign themes of COP26. Following discussion between South Asian counties, this text is now being finalized as a basis to share more widely with other governments.

The UK will host COP26 later this year in Glasgow. At the summit, delegates including heads of state, climate experts and negotiators will come together to agree on coordinated action to tackle climate change and the journey towards net zero greenhouse gas emissions. However, achieving this goal will not be possible without action on Nitrogen. The #NitrogenforNetZero initiative, launched at the April event, opens up a dialogue to widen the scope for climate action and engagement at this pivotal moment. The UKRI GCRF South Asian Nitrogen Hub has a key role in the #Nitrogen4NetZero campaign by providing both scientific expertise and facilitating regional dialogue on nitrogen.  Our SANH scientists from across both South Asia and the UK are also helping provide fundamental scientific expertise to the events through presentations, meeting chairing, providing scientific evidence and contributing to dialogue with policymakers. In conjunction with our project partner, the South Asia Co-operative Environment Programme (SACEP), SANH is dedicated to assisting this high-level policy engagement to ensure real-world change towards sustainable nitrogen management. 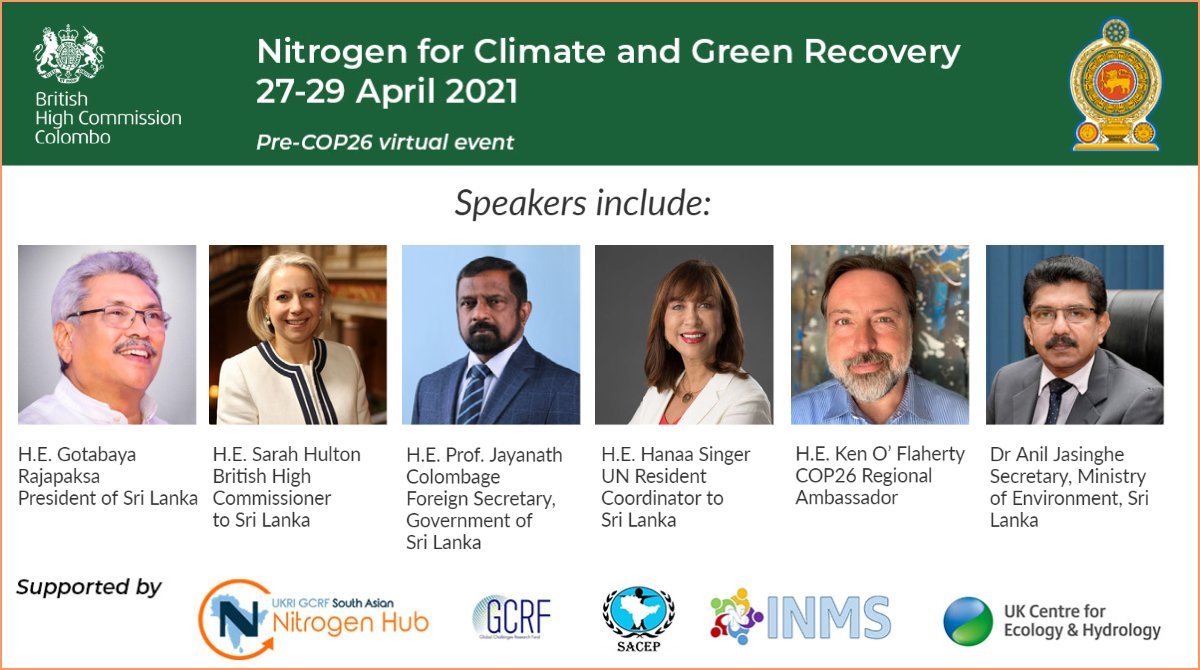