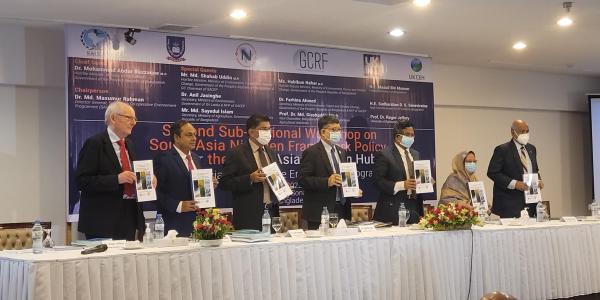 Demonstrating collective leadership on emerging global environmental concerns, scientists from South Asian countries have released a regional report on the status of policies dealing with nitrogen (N) pollution in South Asia. Four countries have also released their national reports (Bangladesh, Sri Lanka, Maldives, and Nepal). These reports document the policies available to counter the high and rapidly growing threats that N pollution poses for the environment, climate change, food security, human health and the economy in South Asia. They are a first step in raising awareness of the problems of nitrogen pollution, and they identify key areas for urgent action.

The policy reports were released in a meeting in Dhaka today (22 June 2022) called by the regional intergovernmental body, South Asia Cooperative Environment Programme (SACEP). The regional nitrogen policy report was released by the chief guest Dr. Muhammad Abdur Razzaque, Hon’ble Minister, Ministry of Agriculture, Bangladesh. He stated that agriculture is the main livelihood in the South Asian region where nitrogen management is challenging for crop production and environmental pollution. Dr. Razzaque also said that it is the high time for us in South Asia to cooperate and collaborate more concretely to develop sustainable nitrogen management for ensuring food security and environmental sustainability in the region. The national policy report of Bangladesh was released by the special guest Mr. Md. Shahab Uddin, Hon’ble Minister, Ministry of Environment, Forest and Climate Change, Bangladesh. He emphasized the urgent need for an intelligible linkage between scientists and policy makers to find pragmatic solutions to nitrogen challenges in relation to environmental pollution, food security and climate change. 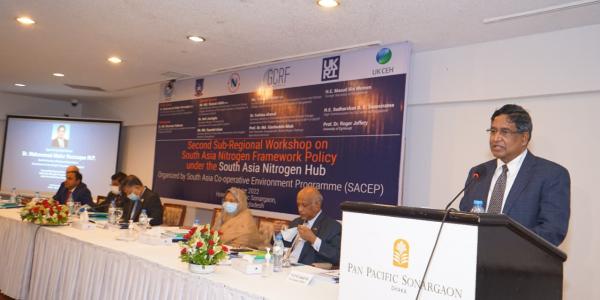 “This is a historic moment for South Asian cooperation to develop an evidence-based policy approach to tackle nitrogen pollution. We thank our partners across South Asia and the UKRI-GCRF-SANH project for making this possible” said Dr Masumur Rahman, DG, SACEP, and the Chair of the today’s auspicious event.

“One of the major research programmes of SANH is to build the policy arena for nitrogen in South Asia. These status reports are an important output, based on the last three years of work, which will help in catalysing informed interventions over the next 2 years” said Roger Jeffery, a Principal Investigator of the SANH project and Professor at the University of Edinburgh, UK. “It is such a great pleasure to work with South Asian countries, as nitrogen is so high on their agenda,” he added.

Mark Sutton, the project director of SANH and professor at the UK Centre for Ecology & Hydrology (UKCEH), said that “South Asia is the only region that has led the global intergovernmental action against nitrogen pollution with two UN resolutions on sustainable nitrogen management. The first resolution originated from a meeting of South Asian partners in 2017 and was piloted by India in the 4th UN environment assembly in 2019. The second resolution was piloted by Sri Lanka in the 5th assembly held recently in March 2022, a few months after the President of Sri Lanka hosted a nitrogen event during the COP26 deliberations in Glasgow during Oct-Nov 2021”.

SANH brings together over 30 South Asian institutions, including universities, institutes and NGOs. Several South Asian countries, including Nepal, Sri Lanka and India, are already working to take action across all the relevant ministries. “India has already established an inter-ministerial high level National Nitrogen Steering Committee to implement the UN resolution on sustainable nitrogen management. This project is delivering important inputs for this committee’s deliberations through its research publications and policy reports” said a leading scientist from India, Dr Tapan Adhya.

“Bangladesh leads the region in urea deep placement technique and is keen on adopting other interventions towards sustainable nitrogen management. This project has been a great interdisciplinary learning experience in aiding evidence-based policies. We would like Bangladesh to produce the next national nitrogen assessment in South Asia, said Mizanur Rahman, Professor at BSMRAU, the host organization of the event in Bangladesh.

The event was organised by SACEP and hosted by BSMRAU. This inaugural session is part of a five-day programme where scientists and National Focal Points from all eight South Asian countries and UK joined in discussions on confronting the challenge of nitrogen pollution globally and in South Asia in particular.

The South Asian Nitrogen Hub (SANH), is a partnership led by the UK Centre for Ecology & Hydrology (UKCEH). SANH comprises around 40 organisations from across the UK and all eight countries of South Asia, with funding from UK Research and Innovation (UKRI) under its Global Challenges Research Fund (GCRF). The Hub was awarded about £15 million from UKRI for five years beginning from 2019, with additional funding in cash and kind from UK and international partners, including SACEP.

Professor Mark Sutton is based at UKCEH in Edinburgh and leads the South Asia Nitrogen Hub. Since 2012 he has been working with the United Nations Environment Programme supporting their work through the Global Programme of Action on the Protection of the Marine Environment from Land-based Activities (GPA) and leading the Global Overview on Nutrient Management for UNEP ‘Our Nutrient World’ (2013). He also leads a GEF-UNEP-INI project on international nitrogen assessment towards the establishment of an International Nitrogen Management System (INMS). He tweets as @MarkNitrogen

Dr Masumur Rahman has been Director-General SACEP since 9 August 2021.  He has a Ph. D in Agroforestry and Environment from Bangabandhu Sheikh Mujibur Rahman Agricultural University (BSMRAU), Bangladesh. Dr Rahman joined the Bangladesh Civil Service in the year 1998. Prior to becoming Head of Mission of SACEP, he was the Director General of the Ministry of Foreign Affairs, Government of Bangladesh.

Dr Roger Jeffery is Professor of Sociology of South Asia at the University of Edinburgh, which regularly ranks in the top 25 universities world-wide. He has carried out research in several South Asian countries since 1970, and now co-leads the work of SANH in policy analysis and engagement. He was lead author of the regional nitrogen policy report.